The Birth of the Messiah? 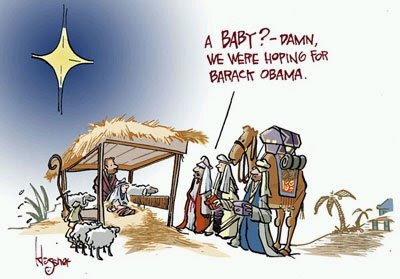 Well, they (by which I mean a large percentage of Americans – Republicans and Catechism Catholics excluded) are celebrating like it’s Christmas over on the other side of the big pond.

And I must say that they have picked the more attractive candidate. As far as one can form an impression from this distance (and believe me we have had no shortage of media coverage of the election for World Leader), there wasn’t much to like about Senator McCain. And as much as I loved Sarah Palin and would really have enjoyed seeing what they made of her in Washington, I think that for her sake and for the sake of her family, she is far better out of it (although I have heard speculation that she might run on her own ticket in four years, I can’t really see it…)

But the thing about good leaders and responsible statesmen is that they really don’t need to be “likeable” or “popular” or even “attractive”. They have to be good governors who will preserve their nation in peace and prosperity while protecting the liberty and rights of every individual member of that society. When leaders have legislative authority they also need to be able to make good laws for the well being of all.

Today I listened to an edited version of the Acton Lecture by Father Robert Sirico given in Sydney when he was here for WYD. His basic thesis was an

explicit defence of that old liberal view, that the state is not God, and that the state that pretends to be God is the beast, or the anti-God, the anti-Christ. This [the separation of the ius sacrum (sacred law) from the emperor’s ius publicum (public law)] becomes then not just a strategic truth, but a doctrinal truth as well. The state no longer bears the burden of being a surrogate religious authority that reaches into the depths of conscience, its moral basis must refer to something outside itself, something beyond the state

What I wonder, with the rise of President-Elect Obama, is whether the voters have perhaps forgotten this separation, and whether many of them are looking to their new president to provide for them what only the Messiah (the real one) can really provide. There is a strange sense that the generation who could not abide their parents “Not Yet” and demanded (in answer to the question “When do we want it”) “We want it NOW”, have lost any sense of the eschatological and imagine themselves to have finally lived to see the dawn of the New Age itself…

0 Responses to The Birth of the Messiah?