I like this picture; but then there's the real thing… 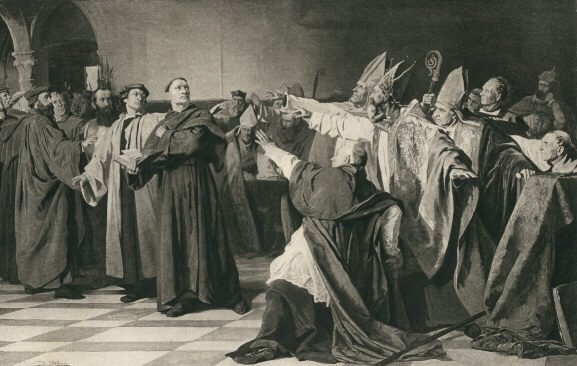 I like this picture. I nicked it from the Cooees blog on “That Petition”. I presume the monk is supposed to be Martin Luther. It’s complete bollocks, of course. Luther never appeared before a council of bishops, only the “parliament” (or Deit) of Worms. Nevertheless, it expresses the contention of the times well…

Ah yes, “That Petition”. I am amazed at how it is being likened to the “95 Theses”. Again, one must object with “bollocks!” The “95 Theses”, despite the fact that they called the practice of selling indulgences into question, were actually quite submissive to the Pope, and did not (as is popularly believed) dismiss the doctrine of Purgatory. Futhermore, they were theses intended for an academic debate in the University of Wittenberg (which never actually took place), and not something that the laity were called upon to sign. It was never included in the Lutheran Confessions (largely for the reasons I have already pointed out: Pope and Purgatory).

It is even supposed that Luther’s legendary act of nailing the “95 Theses” to the wall is just that: legend.

Nevertheless, here is one point where at least one priest in at least one diocese in Australia has gone one better than Luther. This PP has actually put “That Petition” at the entrance of his parish church, and (during Sunday mass mind you) called upon all present to sign the bloody thing. And I understand that this has the approval of the authorities that be in that diocese, although the ordinary himself is not currently in situ to answer objections directly.

Keep in mind that one of the things that “That Petition” calls upon the bishops to do is:

4. Encourage a wide-ranging discussion of the role of women in ministry and in the authority structures of the Church, including the question of women’s ordination

And keep in mind too (for those of you whose memories are fuzzy) that John Paul II concluded his Apostolic Letter Ordinatio Sacerdotalis with the following words:

4. Although the teaching that priestly ordination is to be reserved to men alone has been preserved by the constant and universal Tradition of the Church and firmly taught by the Magisterium in its more recent documents, at the present time in some places it is nonetheless considered still open to debate [eg. by the writers and signers of “That petition”], or the Church’s judgment that women are not to be admitted to ordination is considered to have a merely disciplinary force.

Wherefore, in order that all doubt may be removed regarding a matter of great importance, a matter which pertains to the Church’s divine constitution itself, in virtue of my ministry of confirming the brethren (cf. Lk 22:32) I declare that the Church has no authority whatsoever to confer priestly ordination on women and that this judgment is to be definitively held by all the Church’s faithful.

Of course, one must remember that most of those signing “That Petition” have even less regard for papal authority in our day than the author of the “95 Theses” had in his.

Anyway, I say no more. Maybe the Cooees blokes (and blokette–sorry, Sr Kumbayah, I meant “blokes” in a non-sexist way) will pick up on this story and give you all the juicy details.

28 Responses to I like this picture; but then there's the real thing…